Another Promising Crop is Here!

Schengrund Stables is proud to announce the arrival of six new members to bear the SSLLC prefix!

The first foal was born February 9th and is a sassy bay filly by Cartier and out of SSLLC Evening Edition. This filly loves to show off and knows she is something to look at! Watch for her at the NY Regional Sweepstakes in September!

The second filly was born February 27th and is a cross between Graycliff Tony and SSLLC Stop And Stare. This is our first Tony baby and the first foal out of our mare ‘Libby’ who is a full sister to our WC park horse SSLLC Vantage Point. We’ve named her SSLLC Cover Girl because she is BEAUTIFUL and all legs!

The third arrival was born March 19th and is a super hot filly by HVK Man About Town and out of Arboria Victor’s Pride. Hot, hot, hot like her mamma, this filly is going to be a firecracker in the show ring!

The fourth foal was born on St. Patty’s Day and is appropriately named SSLLC Lady Luck! ‘Patty’ is a beautiful filly by Graycliff Tony and out of our mare Stonecroft Couture. This filly clearly inherited her looks from both of her beautiful parents and with all of her chrome is sure to stand out in the crowd!

The fifth arrival was born on April 20th and is a cross between Graycliff Tony and our mare SSLLC Call On Me. We’ve always wanted to name a horse after Luman and after watching this special colt we decided we’ve finally met our ‘Louie’. Lots of attitude and looks to die for- we look forward to Luman’s opinion on little ‘Louie’!

The sixth foal was born May 24th as Amanda was at Southern States watching the silly Mint Julep class! ‘Eddie’ is a cross between Dragonsmeade Icon and One And Only. This colt has attitude written all over him and should probably be gelded immediately! In all seriousness, we’re sure Luman will be able to direct all that attitude into something magnificent for the show ring! We cannot wait! 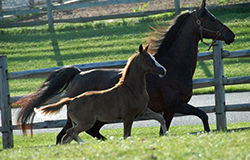