Schengrund Stables is proud to announce the arrival of our finest foal crop to date. Seven little SSLLC’ers arrived this spring and boy are they something to look at!

The first foal was born February 7th, a stunning bay colt by Cartier and out of Futurity’s Touch Of Harley. This guy knows that he is the star of the show and has ‘All The Right Moves’ to make head’s turn!

The second colt was born February 21st and is a cross between Stonecroft Masquerade and SSLLC Call On Me. This was the first foal actually carried by ‘Meg’ and she thoughtfully waited to deliver until Amanda was feeding everyone that morning. This colt has lots of chrome and tons of spunk- he should be pretty exciting and eye-catching!

The third arrival was born March 11th and is a leggy, exotic filly by Stonecroft Masquerade and out of Futurity’s Touch Of Harley. This cross is heavy on the Harlequin and this filly looks to be big and upright with a very feminine expression. ‘Raine’ will be hard to miss when she hits the show-ring!

The fourth foal was born March 23rd and is an adorable filly by Roberto Cavalli and out of our mare Stonecroft Couture. ‘Alexa’ is one of the friendliest foals we have had- she’ll live in your pocket if you let her! This filly inherited her looks from both of her beautiful parents.

The fifth arrival came to us after several long nights of foal-watch on April 13th. ‘Janie’ is a to-die-for filly by DBA Street Talk and out of the fabulously hot mare Arboria Victor’s Pride. We bought this mare in foal at the 2010 CopperDragon Sale. According to rumor, ‘Vicky’s’ foals have lots of spice and we think this one plans on living up to that reputation!

The sixth foal was born April 25th and is a gorgeous filly by Roberto Cavalli and out of Futurity’s Touch Of Harley. We love, love, love, this filly and cannot wait to see what the future holds for her- success without a doubt!

The last foal of the 2011 crop arrived the morning of the Royal Wedding, April 28th. This pretty little filly was obviously named ‘Kate’ in honor of the special occasion. A cross between HVK Man About Town and Futurity’s Touch Of Harley, we’ve repeated this cross many times because we love the results. Perhaps we will make her show name SSLLC A Royal Affair.

And now the true wait begins… to see what they become in the next few years! 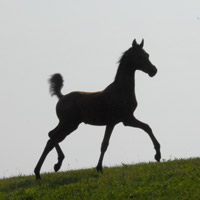