Just before leaving for the Grand National this year we had decided to throw one of our barn favorites on the trailer with Windward Farm to act as a lesson horse for the show. Amanda DuPont and Amanda Krall thought well maybe it will end up as a sale- you never know.

Someone else however had their own reason for allowing “Apollo” to go to that show. As you are about to read, reprinted with permission from The Morgan Horse, the rest is history …

“Adding to the fantastic week enjoyed by everyone at Trinity Farm, Suzanne Haberek had another young rider in the winners circle when Alena Gannon topped a huge field of 23 walk and trot hunt seat equitation riders to win World Championship. Running the class with a split and a call back presented an even greater challenge for the trainers who had to keep the young minds of their 11 & Under students focused for more than a half an hour while both sections ran before the top 10 were selected. The stress was compounded for Suzanne and Alena as Alena was showing a horse they were able to borrow at the last minute, Kevin Schengrund’s bright chestnut SSLLC Primary Contender (Apollo). The great team was cheered on over the rail by Primary Contender’s trainer Amanda DuPont at Windward Farm, and everyone was on their feet celebrating when Alena won the class with an impressive 1-1-3 finish. Alena had enjoyed a great week, taking third in her Grand National class with her beloved Equinox Adagio, when he unfortunately injured his ankle just enough to prevent him from showing back. Kevin and Amanda graciously offered Primary Contender, and the rest is now in the history books as another example of how the Morgan Community comes together when another of our own is in need.”

At the end of the day, one of our own homebred horses made a little girl’s dreams come true completely unexpectedly. And all because of a whim decision! Ahh… Goosebumps!

And for those of you wondering good deeds apparently don’t go unnoticed as another girl’s dreams came true the very next day as “Apollo” was purchased and is thoroughly enjoying his new home! 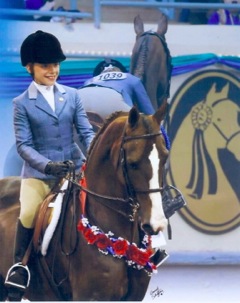