A Successful (and Chilly!) Grand National!

Well another Grand National comes to a close, the coldest one perhaps in the history of the show! Temperatures barely cracked 50 degrees in the morning hours. Very chilly when you’re headed 20 hours Southwest … I thought it was supposed to be warm! Apparently mother nature didn’t get the same memo I did …

Chilly weather didn’t dampen the competition however! What a wonderful show it was with some of the best competition and class sizes in memory!

SSLLC Bourne’ Supremacy had a nice show ending up in 3rd place out of a very deep sixteen in the 4 year old Hunter Pleasure World Championship, even receiving a RWC vote from one judge! Inquiries are invited on this wonderful prospect. Thanks so much to the Crystal Farms team for their hospitality and wonderful job turning out the SSLLC horses. You are all the best!

SSLLC would also like to congratulate Ryan Swope and SSLLC On Demand whom he purchased this summer. The two have only been paired a few short months and Ryan and “Lucas” managed to walk away with the Reserve World Champion Hunter Seat on the Flat Senior Equitation title! Watch out for this talented team in the future! Congrats guys!

Congratulations to everyone for a fun filled and successful Oklahoma! See you next year! 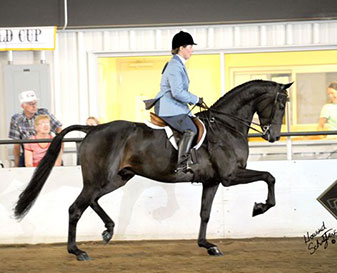