An Outstanding Summer of Shows!

Schengrund Stables would like to congratulate the following owners and their SSLLC bred stars on a fabulous summer in the show ring:

SSLLC Set Me In Motion and Kathy Kyler (pictured at left) of Norman, OK who are under the guidance of Kelly Kraegel. This lovely pair made their show ring debut together this year and are winning everything in the south! We are so happy for their success and hope to see them compete in the big ring in October! Our fingers are crossed for you Kathy & “Farrah”!

SSLLC Bold Moves and Cameron Kay of West Bloomfield, MI who are under the direction of Mary Carlton have had an amazing summer! Cameron and “Cooper” are winning everything in the equitation divisions in the mid-west. This talented duo also took home a blue ribbon in a very tough Jr. Exhibitor English Pleasure class at the New England Regional a few weeks ago. Watch out Grand National, Cameron and “Cooper” are coming!

SSLLC Bourne Supremacy and Laura Vunovich of Eudora, KS who are under the direction of the Wichita Riding Academy. Laura and Indy have worked very hard this summer earning numerous blue ribbons and are headed to the Grand National. We are so proud of you and are so excited to see you together in OKC!

SSLLC Bourne Ultimatum and Cathie Baker of Michigan, who are under the direction of Crystal Farms. This dynamic pair have done very well in the amateur hunter pleasure divisions throughout the mid-west.

SSLLC On Demand and his new partner Rachel Roberts (pictured at right congratulating Lucas with a pat as their victory was just announced) are taking on the western pleasure division under the guidance of Kelly Kraegel! This adorable pair have already won several blues in the Walk/Jog pleasure and equitation divisions and we expect there will be many more to come! Congratulations on a great start together and we look forward to meeting you and your lovely family in person in OKC! We’ll be cheering from the sidelines! 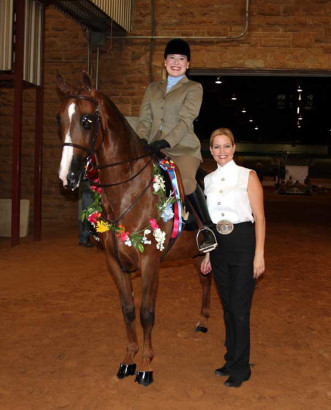